O Great Mother I Bow To You

Kali, the Great Mother Goddess of the Hindu tradition, is the Source, the One that gives birth to All. Known as a slayer of demons, She destroys the army of mind-born delusions symbolized by demons that separate us from the Divine as our own true Self. To our bound, limited and contracted ego identities She may strike terror, at times appearing as a coal-black, sword-wielding, blood-smeared dancer of death and destruction. To our Divine Self, She is our supremely beautiful Beloved, our dear spouse, performing a ballet of incomparable grace, overwhelming us with love.

The Great Goddess Kali can never be understood by the intellect. She and the essence of what She symbolizes are beyond the mind. Don’t be surprised if your rational mind rebels and wants to go no further! Poets and mystics advise us that in order to know Her we must plunge into Her luscious, radiant, blackness, dive through our fear of the unknown, into Her overwhelming mystery and allow ourselves to dissolve in Her velvety midnight embrace. By Her grace we may know the unutterable truth of Her love, even as we are annihilated by Her infinitude. Beware, you may return babbling, forever lost to your spouse! Only a poet saint can assemble the words necessary to point our attention toward Her.

Ramprasad Sen, the eighteenth-century Bengali poet-saint, is one of the most loquacious of Her devotees. Lex Hixon brilliantly rendered Ramprasad’s poems into English verse in his book, Mother of the Universe. Letting your mind step aside for a moment, allow your heart and soul to feast on these two poems:

My blissful Mother exists fully through every creature! (1)

Meditate, O mind, on the mystery of Kali.
Use any method of worship you please,
or be free from methods,
breathing day and night her living name
as the seed of power
planted by the teacher in your heart.

Consider the simple act of lying down to sleep
as devoted offering of body and mind to her.
Allow your dreams to become
radiant meditations on the Cosmic Mother.
As you wander through countryside or city,
feel that you are moving through Kali, Kali, Kali.
All sounds you hear are her natural mantras
arising spontaneously
as the whole universe worships her,
prostrates to her, awakens to her.

The Goddess, who is unitive wisdom,
constitutes the letters of every alphabet.
Every word secretly bears the power of her name.

The singer of this mystic hymn is overwhelmed:
“Wonderful! Wonderful! My blissful Mother
exists fully through every creature!
O wandering poet,
whatever food or drink you receive,
offer as oblation in the sacrificial fire of your body
and dissolve your mind
into her all-encompassing reality.

Listen to me, Death!
You must leave here immediately.
How can you touch me?
I have captured Goddess Kali.
I have bound her hands and feet
with adamantine strands of pure love.
Her intimate presence alone
now shines from the stronghold of my heart.
The twelve-petal lotus that floats in my chest
is surrounded by her fierce flames.
I contemplate with awe
the thousand-petal lotus at my crown
where the golden honey of mystic union
is flowing eternally.
O Mother Kundalini,
my entire being is swept upward continuously
by your current of wisdom energy.
I have taken precautions so that Goddess Kali
cannot escape from within me.
Single-minded devotion guards her with every breath.
These two eyes are her gatekeepers.
My third eye has become her own clear vision.
Suspecting that the fatal fever of egocentricity
would attack my mind and body,
I have taken the ancient remedy
prescribed by my illumined master.
The medicine Om Kali, taken four times daily,
cures the chronic illness of me! me! me!
Emboldened by the indwelling of the Mother,
this warrior poet calls out:
“Listen to me, Death, so your insane pride
will at last be humbled.
You can take away only this form.
I have already begun my deathless journey,
chanting Kali! Kali! Kali!

The mantra Om Kali Ma vibrates with Her power and serves as a divine vehicle for transporting you into Her domain. Using it for meditation, you breathe in Om Kali Ma with every inhalation, silently repeating it in your mind, savoring the subtle sounds of each syllable as She infuses every cell of your body with Her power, radiance and love. With every exhalation, silently breathe out Om Kali Ma, feeling Her presence filling the universe around you. Breathe in Om Kali Ma drinking in Her elixir. Breathe out Om Kali Ma as you float like a bubble in the ocean of the Divine. Your body may be gently swayed by Her lullaby as the ego-mind falls asleep and the Divine awakens within you. Meditate daily, taking delight in all She shows you. 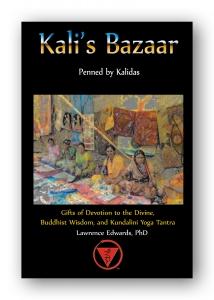 This mind, like a firefly, flashes into existence,
Just to call lovers of the Dark One!
Having been summoned into my beloved Kali,
Her Blackness so mystical, so absorbing,
the mind disappears into Her like a candle dropping
into the midnight ocean,
even the cry of ecstasy is lost in Her depths!
Yet those who gaze into Her unfathomable Void
take on a glow that those with sight can see!
How sublime to reflect Her Dark Light!
How sublime to share Her grace-filled gifts!
Extinguish yourself in Her this very instant!
She has waited so long, so patiently
to embrace you – Her beloved.

What mind can possibly approach you,
Much less grasp you, my beloved Kali!
This ordinary mind longs for you to be simple,
predictable, easily appreciated, a sweet divinity,
a demure goddess, lovely to look at, engendering kindness.
Instead you parade forth in gruesome reality,
unabashed you unleash your limitless creative power,
thrilling the mind and body
with overwhelming sensual delights,
propelling the spirit into awe-inspiring
transcendent domains and
crushing us all in your jaws of time, decay and suffering.

You gave birth to ignorance, and her offspring,
“lacking this” and “wanting that” populate the universe.
Is there nothing you don’t delight in creating?
How is this poor mind ever going to truly worship you?
I set out to circumambulate your divine form,
to do puja to you,
but lifetimes of effort have left me gasping,
seeing your infinitude spread out in all directions,
my mind and heart quiver
with fear and adoration, longing for annihilation in you
my beloved.

You demand full and total sacrifice,
not flower garlands and coins tossed at a statue,
not merely lighting candles and prostrating piously,
not sitting still as a corpse lost in the illusion
of inside and outside,
No, you delight in swallowing all sense of separation,
offer me your individuality you say,
offer up your ego mind,
offer up the waking, dream and deep sleep states!

This yoga is only for the insane
drunk on the nectar of Divine Love.
If you drink from the Holy Grail
you will drown in the end.

For more sacred poetry and works by Kalidas (Lawrence Edwards) visit The Soul’s Journey Publications. When the intellect grows jealous of the heart and soul enjoying the nectar of meditation on Her, you can feed your mind the works of Lex Hixon and Ramakrishna Paramahamsa – the great 19th century Kali devotee of Dakshineshwar, India. Elizabeth Harding’s book, Kali: The Black Goddess of Dakshineshwar, is also well worth reading.  The visions Kali granted me are shared in The Soul’s Journey: Guidance From The Divine Within, Awakening Kundalini: The Path To Radical Freedom, and Kali’s Bazaar penned by Kalidas.